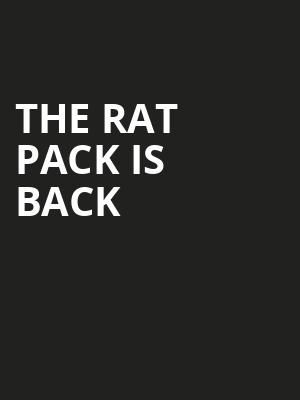 The Rat Pack Is Back Used under Creative Commons License

The Rat Pack Is Back

These cats can sing!

Why See The Rat Pack Is Back?

Head back to the Golden Age

Relive the days of the Rat Pack with Las Vegas' most famous Entertainers and their live 12-piece big band as they appeared live in the legendary Sands Hotel Copa Room. It's the only Vegas-based show with national touring companies and an award from the "Congress of the United States" and now its in fourteenth smash year with over 4,500 shows performed in over 34 states, 3 foreign countries and over one million tickets sold.

With a stellar cast of some of the finest performers in the business, The Rat Pack is Back has been hailed as the next best thing to seeing the original Rat Pack. The quartet, comprised of eerily accurate impressions of Frank Sinatra, Sammy Davis Jr., Dean Martin and Joey Bishop, effortlessly evokes the charm of the Big Band era while transporting the audience back with classic songs like 'Fly Me to the Moon' and 'New York, New York'.

Call Me Clyde With The Orange Shirt: “Incredible Performance ”

When we arrived I was a little nervous, not knowing what to expect, but... more

Was surprised by the professionalism of the entire cast and their performance.... more

Sound good to you? Share this page on social media and let your friends know about The Rat Pack Is Back at Pabst Theater.