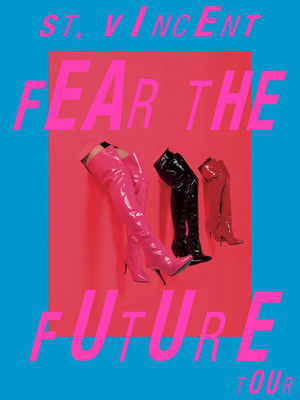 Three years after her robotically pulsating self-titled album, St. Vincent returns to the fold with her fifth effort, and this accompanying Fear the Future Tour.

One of the indie world most recognisable and respected figures, multi-instrumentalist St. Vincent (real name Annie Clark) carries on the legacy of heroes David Bowie and David Byrne (who she recorded a collaborative album with in 2012) by bringing together melodious pop and avant-garde experimentation. Each of her releases has been met with a tidal wave of critical acclaim and growing commercial success, and she recently branched out into filmmaking by directing a segment of the horror anthology XX. Oh, and she can shred with the best of them. Among her best known numbers are 'Digital Witness,' 'Cruel,' and 'Laughing with a Mouth of Blood.'

St. Vincent put on a terrific show in her hometown last night at The Bomb... more

Sound good to you? Share this page on social media and let your friends know about St. Vincent at Riverside Theatre.