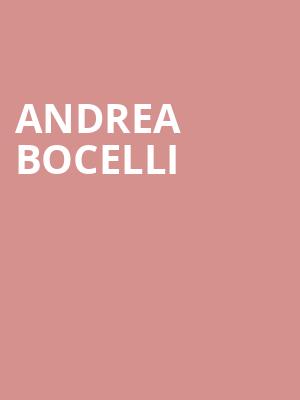 The Italian singer doesn't tour often so book now to see a classical music legend in the flesh!

One of the world's most successful classical crossover and multi-instrumentalist performers, Andrea Bocelli's passion for music has always been with him, since learning to play the piano as a young boy in Tuscany, Italy. Since then, he has gone on to sell 80 million records, win a Golden Globe Award and be honored with a star on the Hollywood Walk of Fame for his services to Live Theatre.

There aren't many singers that can claim to be a legend in their own lifetime, but he is often described as such, with fans coming from high places to heap acclaim on this operatic powerhouse, such as Elizabeth Taylor, who said of Bocelli: 'My mind, my soul were transported by his beauty, his voice, his inner being.' proving that his angelic voice can touch and inspire anyone who hears it.

Setting out on a rare tour this winder, this is a stunning opportunity to see the man himself in the flesh in a performance that is sure to stick with you for some time to come.

How to explain what it feels like to be present at an example of respect... more

Quite the experience to be in the presents of such amazing talent. Go.... more

Sound good to you? Share this page on social media and let your friends know about Andrea Bocelli at Fiserv Forum.