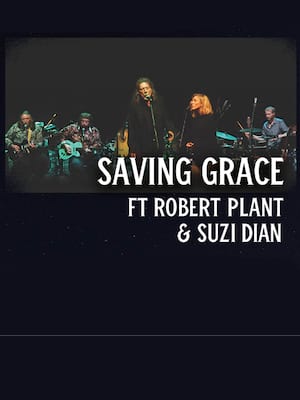 Robert Plant is back with a new band

Rock and roll icon Robert Plant is back and hits the road this summer on tour with his brand new band, Saving Grace. Featuring a raft of talented musicians including Suzi Dian, Tony Kelsey and Matt Worley, the group is inspired by Plant's life long love of British and American folk, Welsh Marches and spirituals and standards.

A mighty force in the tapestry that is rock and roll, Robert Plant is one of the founding members of Led Zepplin. His career post 'stairway has never stalled, with multiple solo albums and appearances cementing him as one of the elder statesmen of the genre. This new venture will show yet another side to his awe-inspiring talents - do not miss out as Saving Grace make their US debut!

Sound good to you? Share this page on social media and let your friends know about Saving Grace featuring Robert Plant at Turner Hall Ballroom.