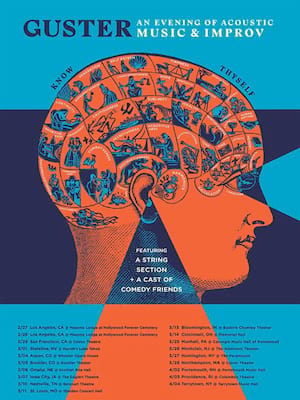 An evening of acoustic improv and comedy

an evening of music and comedy

Boston alt-rockers Guster are switching things up for their 2020 tour! In addition to the foursome's airy, feel-good indie pop, these intimate dates will take both band and audience on a unique journey of music and comedy, improvised live for your pleasure every night. Joined by Upright Citizens Brigade alum Connor Ratliff and an array of friends and special guests, the group promise to deliver a show you'll never forget.

Known for their effortless way with sunny melodies and buoyant hooks, Guster, led by singer Ryan Miller, broke into the mainstream with their third album Lost and Gone Forever in 1999. Among their best-known tracks are 'Amsterdam' and 'Airport Song'.

Seen Guster? Loved it? Hated it?

Sound good to you? Share this page on social media and let your friends know about Guster at Pabst Theater.