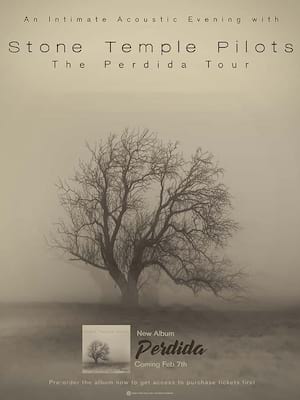 These songs are expertly sculpted, playing upon the kind of riffs and melodies that made the group alt-rock titans in the '90s

Stone Temple Pilots became staples of rock with their hit 1992 album 'Core.' The album sold over 18 million copies in the US alone and was certified 8 platinum. The band are also Grammy and Billboard Award winners and are now back on the road in 2020 on an acoustic tour in support of the upcoming album Perdida.

Now lead by Jeff Gutt, San Diego-based STP first debuted in 1985. In the years since they've had a number of line up changes, including original frontman Scott Weiland and the late Chester Bennington. With Gutt onboard since 2018, the group are taking on the next decade with positivity and plenty of new hits!

Sound good to you? Share this page on social media and let your friends know about Stone Temple Pilots at Turner Hall Ballroom.